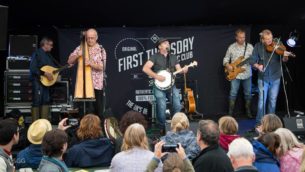 Slâinte are a five-piece band specialising in Celtic music. They have built up a huge following among fans in England, Wales, Scotland, Ireland , America, Portugal and Italy. Now it’s time to build their fan base in the Bath Road as they join us for their exmouth debut on Saturday 11th May from 9pm.

In their quieter numbers, they conjure up sounds that delight and captivate. In the instrumental sets, they have an amazing pace and energy. Then the tempo hots up, the harmonies get thrown in all directions, and everything is treated with fabulous musicianship and a sense of enjoyment that is totally infectious.

Slâinte band members play an extraordinary variety of instruments from the harp to penny whistles, flute, fiddles, guitars, banjo, electric bass, mandolin, bodhran and bouzouki. Put together with a range of harmonic voices, you’re in for a real musical treat.