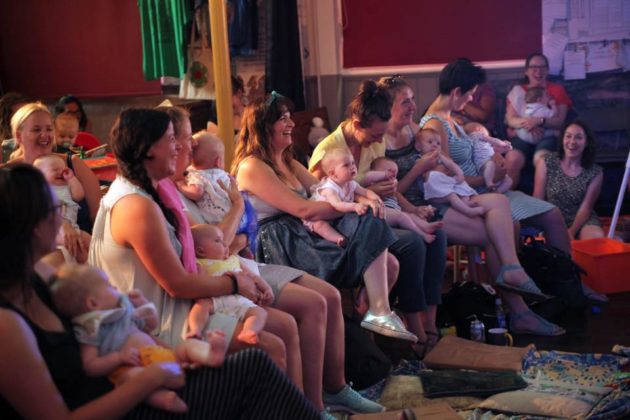 Following the success of our first event, Aftermirth returns to the exmouth on Friday 31st May at midday in our upstairs room.

We don’t need to tell you that the journey of parenthood is a magical and maddening one so what better way to cope with it than through stand up comedy! Aftermirth is an adult comedy club that you can bring your baby to.

Top circuit comedians (see below for this month’s line up) will deliver their usual club routines so the material is mature and sweary with the odd birth story flash back…. The only difference is it’s during the day. Babies under 18 months are welcome, but please don’t bring older toddlers because they tend to heckle!

This special afternoon gig has reduced amplification and a dimmed room so no one will notice those red eyes from sleepless nights. You’re encouraged to bottle, breast or Haribo feed and you can walk about or shake Mittens the Special Rabbit in order to soothe your offspring and no one will moan or mutter if your little one cries or screams.

The gig is also open to parents, Aunts, Uncles, Grans, carers, in fact anyone who needs some afternoon comedy and doesn’t mind some cute babies in attendance.

Note there’s limited space, so leave the buggy behind if you can or park it in our “buggy park” at the end of the car park.

Aftermirth is lovingly curated and compered by Angie Belcher. Find out more here.

This month’s headliner is George Ridgen is already one of the most exciting, hotly-tipped and sought after new acts on the UK comedy circuit and frequently gigs up and down the country for the countries leading clubs and promoters. Having excelled in a host of new act competitions in his first year, George made his Edinburgh debut in 2015 when he performed as part of the prestigious AAA Stand Up Late showcase at the Pleasance Courtyard for a full sell-out run.

George is supported by Becky Brunning and Laura Monmoth.